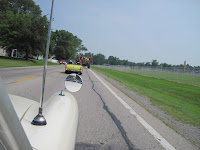 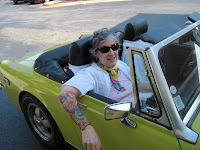 We often laughed at the signs for the towns along the way where the population was mentioned. There were towns with 300 and 612 people listed. The big towns had 2,000 or maybe even 5,000 people. We saw few places to fill the little tanks in our cars or to take care of other necessities. When we reached the second town with more than 5,000 we figured it was time to stop to replenish ourselves and the cars. As the pumps were working, we spoke to one guy about the MGBGT that he used to own. Another guy told us about a great little store and museum just north of Effingham where we had decided to enjoy our lunch break.

When we gathered in the convenience store, Jack tried on hats with fake hair coming down his back, we marveled at the choices of whiskey and wine that were available for the drivers getting fuel – including at the drive thru window, and cooled down a lot as it was still very warm under the hot sun. The one real purchase were a pair of tattoos for Jack and Kathy to wear on their arms as sun protection.