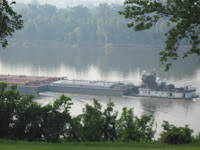 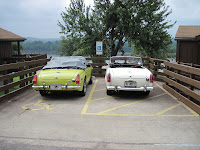 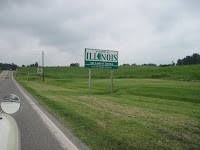 There are few words that can properly describe our travels on Day 3 but the best are simple – Corn and Beans!! At one point we talked about all the various ways in which Corn is a part of our lives. I started with Yellow corn, White corn, Butter and Sugar corn. Barbara then got going with popcorn, corn flakes, corny, cornpone, corn casserole, corn bread, corn cakes, corn tamales, corn tortillas, corn meal, corn flour, corn nuts, corn syrup – you get the idea. Then there were the soy beans but we won’t repeat the performance. Let it suffice to say that we spent the day amidst the corn and soy fields of Illinois.

Yes, we started in Cave-in-Rock with one of the slowest breakfasts ever. It took about 30 minutes for the cook to deliver our meals and there were only two other people in the restaurant. We then completed the packing and off we went. We were following Jack and Kathy. Heading up the hill from the river, they started waving at us and pointing out something. All we could figure was a sign welcoming us to Illinois so Barbara snapped a pic. Little did we know that they had spotted a stray deer. We missed that.

Heading north we began on Hwy 1 and in about 40 miles it shifted to Hwy 45. And that was our route all the way to Champaign. Along the road we saw so many silos and grain elevators that we lost track of the numbers – but who was counting  At one point the grain elevator was so big that it stretched from one side of the road to the other and we drove right through it. Fortunately, none of the grain spilled on our heads.