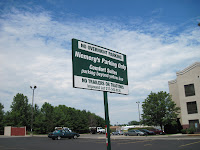 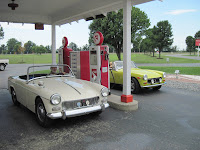 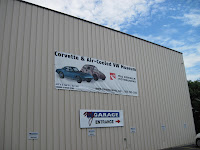 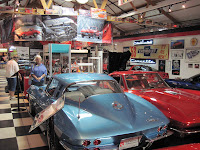 Then we were off to Effingham. As we drove into town, we found the downtown area and spotted a bar that was open so we thought it might be a good place for lunch. No such luck as in Illinois a special license is needed to serve food in a bar. We were directed to a street on the west side of town – three blocks or so away where there were a number of eateries. On the way, we actually drove past an O’Reilly’s – and did not stop. We found a local eatery called Niemerg’s that was packed so we thought we had found a really nice place. The waitress, Barb, was delightful and even brought us a bucket of ice to keep our Kool Ties in while we enjoyed lunch. The only problem was that the food was barely passable.

On the road again, Jack almost stopped at O’Reilly’s but had second thoughts since we already had a back-up fuel pump. One is enough! Off to the store and museum we went. It is the Mid America Motorsports and had a number of Corvettes and VW beetles from the 50’s, 60’s, 70’s and 80’s. Some were even for sale at reasonable prices. In addition, you could purchase all sorts of stuff for a Corvette or VW enthusiast. When we arrived we stopped at the antique Gas Station for a fill-up at 24 9/10’s cents a gallon – couldn’t beat the price