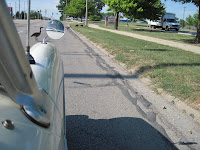 After about a half hour, we were off again for the final run into Champaign. Entering town, we were greeted by a flock of Canada Geese taking a stroll across the highway. Cars stopped to let them pass. As we wound our way around and through the campus of the University of Illinois, Barbara commented about the bumpy roads which were bothering her back. This was on top of the bumpy road coming into town. But, we did get a glimpse of the very large university campus. Finally we found our hotel and settled in. After cooling down a bit, Barbara and I went for a pre-dinner swim. Not a good idea as the pool was way too cold and the hot tub was way too hot. I took the cold plunge for about a minute and then sat in the hot tub for about 2 minutes.

Back to the room to prepare for dinner and to plan our next day’s venture.
Dinner was at the recommendation of the desk clerk and was an interesting place in Urbana called The Courier Café. It is in a building that was close to 100 years old and had once been the print shop for the local paper. It has been this restaurant for over 30 years. Around the dining room were many artifacts from earlier years in the life of Urbana. One interesting piece was a pendulum clock from Coca Cola. I wondered why it was not in Atlanta at the Coke Museum but no one had an answer. Once again the atmosphere was better than the food. The one thing I can say for it was that they had a verey nice local ale on tap – my first real drink since hitting the road.

As we arrived in Champaign, we noted that we had traversed 1,000 km from our departure. And, I'm sure you noted that on this, our third day, the Midgets rode smoothly from beginning to end.