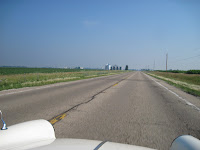 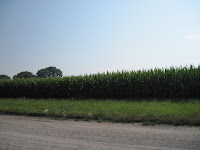 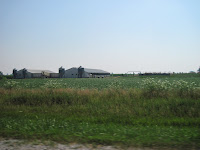 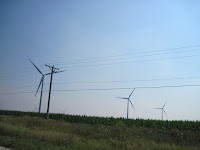 Yes, Day 3 was rather boring and as we set out on Day 4 after a quiet night in Champaign, we continued the boring ride north through central Illinois. We did switch from US 45 to Illinois Hwy 47 so as to be a bit further west of Chicago as we blew past in the afternoon.

We sort of expected that our fate was sealed by the choices we made for our travels. Little did we know that things would change rapidly? No, we didn’t run into any technical issues – fortunately. Instead the scenery changed as our olfactory senses were challenged by those awful odors that emanated from the sides of the road. First there were the sows! Then there were the turkeys struggling to get out of their coops right next to the corn and beans. You might think there was some connection between the animals and the vegetation.

A bit further north we encountered one of the marvels of the modern world. We all know about the impending shortage of power to operate all of our toys. In the fields mixed in with the beans and corn were these tall white towers with three pointed blades spinning around and around. They were everywhere – up close to the road, behind the silos, next to the houses and surrounded by those darn corn and bean plants. Yes, this was a windmill farm generating electricity for all of us. What a sight.