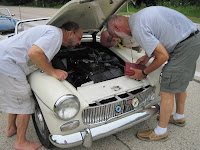 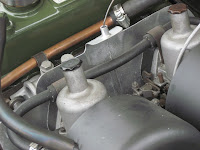 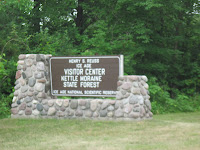 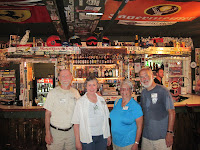 Then we were off for the final stretch to Elkhart Lake. All was going smoothly except for the time that Jack missed a turn and we had to call him back. Then, I noticed a problem. My throttle was sticking and I could not get it to let off of the fuel to slow down. We quickly called ahead to Jack and got him to pull to the side of the road. I stopped the car by taking it out of gear and then cutting the engine as soon as I could. A quick assessment determined the problem – a broken throttle cable. Of course, none of us carried a spare. We began thinking about what we had that could be made to work for the last 25 miles when we had the thought of calling the guys in Elkhart to see if anyone had an extra cable. Of course, they did and two of the guys, Peter and Dave, hopped in their Honda and came to the rescue. By the time they arrived, we had sent Barbara and Kathy to the Kettle Moraine State Forest – an Ice Age National Scientific Reserve which just happened to be where we pulled off the road. They got to enjoy an interesting exhibit, watch a movie about ICE from the glaciers and enjoy the cool air conditioning while we waited for the guys to arrive. During our wait we prepared the car for the new cable. Twenty minutes after their arrival we were again on our way and shortly arrived in Elkhart Lake and the Victorian Village Inn where we have settled in.

A short trip to the laundry with a restaurant and car wash next door took care of the rest of the afternoon and it was time to meet the other Spridget drivers at our opening meeting at the world famous Siebken’s Stop-Inn Tavern where we enjoyed a bottle of local brew.

Thus far we have traversed 1492 KM. We have lost 20 pounds each from all of the sweating and gained it all back with the water and wonderful food that we have taken in. Yes, it has been a glorious trip thus far and we are looking forward to the drives and shows in the coming days.