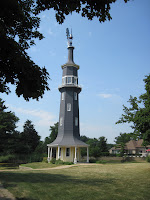 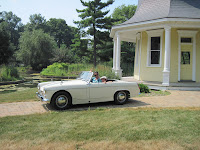 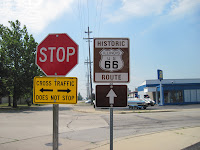 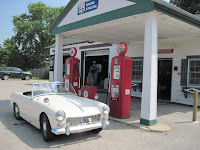 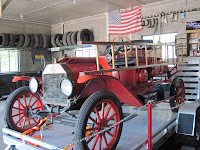 Continuing north, we went through more little towns with populations of 150 and 330 and even 1002 where we figured that someone had just had twins. Most were little more than a stop sign or a single stop light. Few people were seen anywhere possibly due to it being a Sunday morning. There was that lone guy rolling down the main street on his skate board right in front of the policeman. This would all change when we rolled into Dwight (pop. 4400). It was time for a stop and we noticed a sign for a windmill. At the gas station along the main street – a sheet metal building with no air conditioning but 4 or 5 guys hanging out inside – we learned that there really is an historic windmill in town so off we went to find it – with good directions. It was all of 6 blocks away. Next to this beautiful early 20th century mansion that now serves as a restaurant and catering hall, especially for weddings, was a beautiful windmill that is now a part of local lore. The house and windmill were originally constructed in the 1890’s (did I say early 20th century?) for the man’s mother-in-law. While enjoying the gardens and other sights around, we met a lovely family from Switzerland who are touring the Midwest for the next three weeks. Of course, I couldn’t pass up the opportunity to offer their son the pleasure of sitting in the Midget in front of the windmill.

On the signs about the windmill we learned that a few blocks away is another piece of important American lore. Skirting the edge of town is a small section of historic Route 66. But better is the historic ‘gas station’ that still sits right on the corner of a main artery into town and Route 66. We had to stop by as reminder that I actually grew up near a different section of Route 66 in Oklahoma. The Swiss family followed us and we also met a touring group from Denmark. We were fortunate to add our pins to the map as the first visitors from Atlanta. The most amazing part was that there were far more pins on the European section of the map than the American section. Maybe the fact that the AAA book doesn’t even mention Dwight as a stop of interest might explain this.