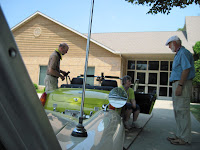 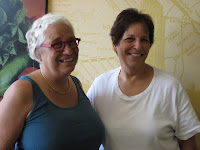 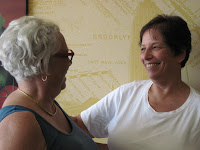 Since we were scheduled to meet Barbara’s high school friend (Best Friend maybe but I had never heard of her in over 40 years) in Sugar Grove, we pushed on. We also began to feel the heat rising as we were in mid-day now. At one point Jack became concerned that his breaks might be over heating so we had to pull of the road to check them out. Fortunately, there was a lovely church beside the road with a big tree to offer some much needed shade. At one point I looked at my watch and realized that this church must have been abandoned as it was approaching noon and no one was there. After a half hour or so and a few messages left for Scott back in Atlanta, we set out once again for our meeting with the long lost friend.

We pulled in to the shopping center where we were to meet knowing that there was a bank with a drive through for several cars that would provide shade. We met Joyce and had a lovely lunch at Subway. Barbara and Joyce talked just like old friends who had not seen each other since there High School days – that’s more than 43 years. Unfortunately, the two long lost friends could only be together for about 45 minutes as we had to push on.