Cowboys and Farmers are welcome 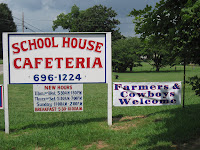 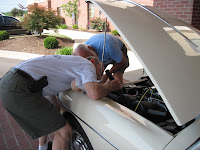 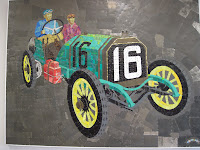 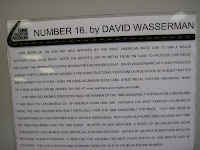 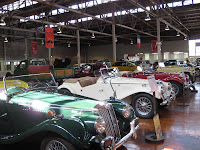 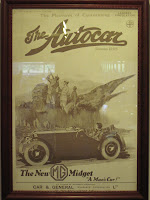 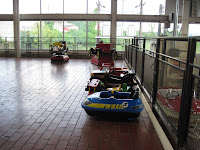 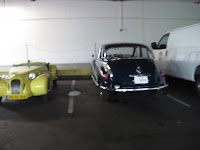 Today started off beautifully in Madisonville, KY. The sun was high in the sky when we departed for our short run down to Nashville where we planned to see the Parthenon replica and visit two museums. All was going well until we reached Springfield, TN. First, the rain started and then the skies opened. We got the tops up and the side curtains on in time to basically stay dry. But, my Midget didn’t like the rain and started to really act crazy. I knew we had a bit of a problem with the fuel going through the Carbs and we addressed this in a number of ways. When we got to downtown Nashville on our way to lunch at Noshville, a Jewish Deli, the engine started really sputtering. After lunch, on our way to the Parthenon, a few blocks away, I hardly made it. I had to stop on the side of the road and we made an adjustment and that got us to the Lane Motor Museum to see a private collection of autos from many countries and spanning the 1930’s to the present. Many were absolutely beautiful as some of the pictures indicate. Barbara particularly enjoyed the children’s area and some of the posters in the Art collection. While in the museum, I was on the phone with Scott in Atlanta and with the president of the Nashville British Car Club trying to figure out what to do next. Scott suggested that I change the Rotor button which I did and then the car ran beautifully.
So, we got back in and decided to head out to Murfreesboro for our overnight stay. Unfortunately, on the way the car started sputtering again but it continued to work and got us the 30 miles down the road to the hotel. Jack and I continued to fiddle with the carburetors and the idle point to keep the car running. We have decided to start working on the carbs early in the AM to see if we can fix them. We also have the names and numbers of two local mechanics in case we need to take the car to them. One is the guy we stopped at here on the way north to work on Jack’s car. So, I guess it is my turn now.
Other than the car problems, we did enjoy a stop in Adams, TN at an old school house that is now an antique setting with many different dealers. Barbara was attracted by the sign she had seen on the way north – Cowboys and Farmers are Welcome. But Kathy wanted to check out the place to see if they had any good beads. Barbara found two interesting items – a small bag that is beautifully made and a milk crate with the insignia for Beatrice Foods, the company that my great grandfather was a founder of in Lincoln, NE. We didn’t think the milk crate would fit in the Midget but it fits nicely right behind the seats. Kathy didn’t find any beads but she did find some interesting spoons that she might turn into something interesting. As we stepped outside, the rain started lightly.
Our lunch at Noshville was delightful. Who would want a better lunch that that provided by a deli including the pickles, my Dr. Brown’s soda and Boylan's Birch Beer that Barbara had.
We didn’t make it to the special exhibit that Barbara wanted to see at the Tennessee State Museum due to the issues with the car so I guess she’ll have to take a ride up here in the next few months with some friends.
We did manage to find another locally owned and locally operated restaurant only a block from our hotel that bills itself as an Italian Bistro. Sounded great even though the owner is Vietnamese and came to Murphreesboro from New Orleans after Katrina! But, the most interesting part is that the specialties of the house are all Cajun. Kathy did enjoy here etouffee while the rest of us had the Italian. You just never know what you’ll find in these small towns we’ve been visiting.
Tomorrow we hope to make it home to Atlanta and bring this adventure to a happy ending.