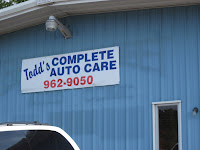 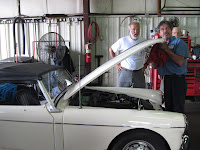 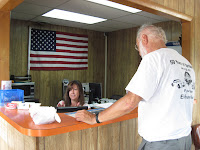 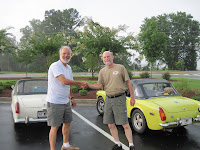 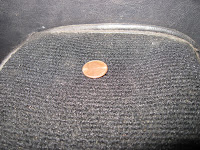 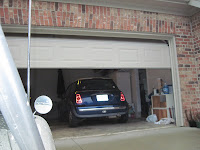 Today started out just as I figured it would last night. We needed to look at the car and see if we could fix it. Jack and I met about 7:00 and quickly decided that my Midget needed more expertise and a place to work on it. So, I called Todd’s where we had stopped on our way north when Jack’s car was not working. They had time and invited us to stop in. So, we rounded up the women and our stuff and headed out with my car sputtering all the way. Fortunately, it was only about 3 miles from the hotel and we pulled right into one of the bays. Todd and Cliff compared notes and Cliff got to work with us while the women sat in the air conditioned office with Amy who runs the office end of the business.
After about 2 hours, we had changed the spark plugs – I had a spare set – and the car didn’t run any better; we checked out the new rottar button that Jack and I installed yesterday in the garage of the Lane Motor Car Museum and still nothing. Finally, we took a look at the Coil and discovered the cable to the Coil was carrying very little power. Since I had a spare coil we switched it out and added a new cable and all was working fine. Finally I had peace of mind and we headed out of Murfreesboro about 11:00 AM local time for the 7 hour drive to Atlanta. With the time change, that meant we would get home about 7:00 and that is what we did. We stopped only three times on the way south – for fuel, for a stretch and for lunch at the Mt. Vernon restaurant on the way into Chattanooga.
When we parted company with Jack and Kathy in Canton (about 45 minutes out) we enjoyed one last treat – a dish of custard ice cream with chocolate sauce. Then we headed the last bit in the rain with Barbara trying to mop up what she could so she would stay dry – impossible!!!
We are not superstitious but!!! On the second day out, I found a penny (head’s up) on the ground beside my car door when we had purchased the second Fuel Pump (remember that story?). Barbara put it on the console between the seats and it stayed there the rest of the trip. It may have helped us with our troubles 
The house was a good site to see. We unloaded quickly, Barbara called her parents and the kids and I took a shower and then headed to Moshe’s for dinner. Now to look at the mail and get ready for our next trip on Wednesday to Hood River, OR by AIRPLANE!!!