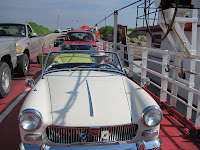 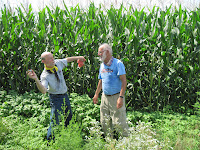 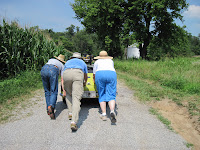 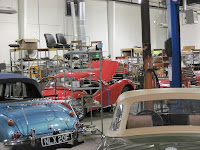 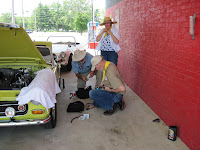 Greetings from Cave-In-Rock, IL – yes, it is a real place with a gorgeous view of the Ohio River. We got here on a wonderful Ferry from Kentucky after a shorter day than yesterday and without most of the problems that we had then. But, that is the end of the story. So, let me go back to the beginning.

As you know we left Atlanta early on Thursday morning before the sun had risen. We met our friends, the Orkin’s, in Canton right on schedule. The drive across 140 to Adairsville and then north on 41 to Chattanooga and over Mont Eagle was delightful. We had no issues or concerns. The engines purred along and we all enjoyed the cool breezes as we watched the gorgeous scenery pass by. Yes, we stopped a few times for the necessities and to stretch our legs.
As we came down from Mont Eagle, Jack’s Midget started developing problems with the fuel getting through properly. It appears that the fuel pump was sending a message. Our first major repair was to add a second pump under the bonnet in Manchester where we were fortunate to land in a carwash which meant a covered spot out of the blazing sun.

On to Murfreesboro with all systems working but at high speeds so as to make sure we got there. We did and stopped for a delightful Southern lunch at Kleer Vu Café. It was really good! We then went to what has become our favorite Auto Supply store – O’Reilly’s. We got some advice a few parts to make sure the second pump was on properly and then went to Todd’s Complete Auto Care where we met Amy who treated us warmly and with a wonderful smile. Todd welcomed Jack and his Midget in to one of the bays and provided some heavy equipment to lift the car so Jack could disconnect the original pump. And, off we went with an appointment with JD’s British Cars in Nashville. JD went over the entire system and assured Jack that all was working fine but the original pump was probably on its last leg and would stop working smoothly when it got too hot. He did suggest that Jack only use the original and the secondary pump was disconnected. Ashley in the front helped us figure out where to head for the night and how to get there. Reservations were made and we departed from JD’s about 6:30 (local time) which meant that we had already been on the road for 13 hours. Suffice it to say that when we got to the hotel, only three things were on our minds – a lite dinner fulfilled by Sweet Cece’s and their delicious frozen yogurt, nuts, and fruit a quick swim and then sleep.

After that good night, we arose early, but not as early, and headed out after breakfast. We had gone about a mile when Jack again pulled off into an Auto Zone with problems with the pump. Once again the secondary pump was connected and off we went.

We think the girls needed some time so our next stop was at a thrift store where they went shopping and Kathy came out with supplies for her jewelry business. Then back on the road where we found O’Reilly’s and I bought a Fuel Pump – Auto Zone didn’t have one (see above). Little did we know then but…..

By this time we were sort of tired with Tennessee and headed quickly to Kentucky – all this time still on Highway 41. It was a smooth ride tooling along between 80 and 90 km/h – guess I never mentioned that my Midget still measures in km/h from its original days in Germany in the early 60’s. When we arrived in Hopkinsville known, by the locals as Hop-town, we felt we deserved a nice cold drinks and stopped on a shady spot along Main Street where we found Grammy’s Kitchen. Cold drinks and a piece of homemade pecan pie restored our energy for the next short leg of the drive to Princeton where we decided to stop for lunch. Of course, Jack had always wanted to visit Princeton based upon its historic reputation!

We found another delightful southern restaurant in the center of town called Peggy’s Cafe. It seems that it is the only eatery in downtown. Other than the unanimous rejection of the corn bread, the food was wonderful. Of course, in the middle of lunch, Barbara discovered that one of her Kool ties had disappeared. This really upset her but she did get over it and enjoyed the meal.
As we were leaving the restaurant, we met Peggy’s husband who it turns out has a son living in Grayson around the corner from Jack and Kathy and another son in Duluth, GA. He is a retired policeman from Florida and asked if we knew Blairsville. Of course we do as that is one of the places we often pass through on drives in the north Georgia . The reason is that many of the retirees from police departments in Florida have retired there but he wanted to be different and returned to the ‘city’ of his birth – Princeton!

While girls went shopping in another antique shop, Jack and I walked back to the cars and found Barbara’s Kool tie. We then checked out the cars. I added some oil and Jack carefully checked the second fuel pump as it had been making some noises. We decided that it was doing fine. But, then Jack realized that one of his bandana’s was missing so back to Peggy’s we went in the Midget’s to see if it was there. More conversation and a quick meeting with Peggy and showing off the cars and we headed out toward the ferry crossing into Illinois. About ten minutes later Barbara and I get the call on the walkie talkie that Jack’s engine had stopped again and he was coasting along looking for a place to turn off the road. We quickly turned around and by the time we got back to them, they were stopped and two cars were stopped behind them. With the help of one of the drivers we pushed Jack’s Midget up a slight incline and off the road on to a gravel drive beside a corn field.

Fortunately, we had the extra fuel pump that I purchased early in the day. It only took about 30 minutes and the new pump was in place and running fine. Of course, the corn fields thought that they could keep our secrets!!! While we were busy changing the pump – again – Kathy found the missing bandana and Barbara put it on but neither Jack nor I noticed to the great disappointment of the girls.

With the new fuel pump in place off we went again. As we drove into Marion we decided to stop at a Napa store to get a new fuel pump. No Luck!! But they did tell us about another parts shop down the road, Bumper to Bumper or Crittenden Auto Parts, which appears to be locally owned. Guess what? They had just the right one and Jack purchased it. We’re now ready for the next time  Of course, as we drove into the parking lot, Barbara spotted the 88 Dip sign and off the girls went to enjoy the soft Ice Cream.

From there it was an easy run down the hill to the Ohio River and a short wait for the ferry. While waiting, we met the owner of the ferry, Lonnie Lewis, and learned all about the flood that rose over 14 feet above the road where we were standing and a ½ mile inland. The ferry ride was quick and without incident. And from there the ½ mile trip to the Lodge where we are staying the night in luxury accommodations compared to last night’s hotel in Nashville. The view of the river is the reward for the drive.
Posted by Paul at 7:03 PM