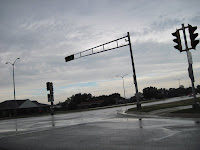 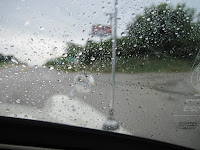 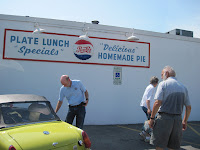 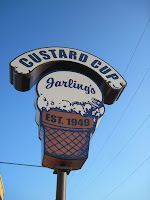 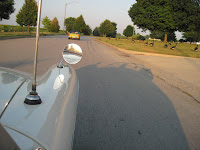 We awoke early and got our act together for a 7:15 departure from Elkhart Lake. We even had a few minutes to bid farewell to others who were up and about at that early hour. We also learned that we were likely to encounter a bit of rain – which we did starting about 10 miles after we hit the road. Barbara knew we would as she saw a flock of brown and white cows lingering on the ground and said that this is a sure sign that rain is coming. We drove for a short bit with the tops down but as the rain got heavier, we stopped to put up the tops and then a bit later we had to stop again to put the side curtains (windows) on to really keep out the rain. We were with the rain for about 3 hours until we had crossed into Illinois. However, before we reached the border, we found a delightful little home grown restaurant for breakfast. Since it was operated by a Mexican family, their Huevos Rancheros, which three of us had, were terrific.
We continued down the same route that we went north on until we reached Dwight where we looked for a place for lunch. The downtown area had 5 pubs and bars but none served food after 2:00 and it was about 2:30 by then. So we headed east as planned toward Kankakee and found a delightful place for lunch that specialized in Homemade PIE. Yes, we each had our very own piece of PIE! We had planned to spend the night there but since it was only 4:00, we decided to head on down to Danville for the night.
As you can see, the day was rather boring especially once we got into the Corn and Beans country with silos and grainery’s every 6 to 10 miles. But this was all to change as we entered Danville. I shared with Jack and Kathy that there were no places to eat near the hotel so we had better stop while passing through town. All of a sudden Jack, who was leading, pulled sharply to the left into the turn lane and I had to follow quickly. There on the opposite side of the street was Custard Cup. Bet you can’t guess what we had for dinner!!!
As we approached the hotel, the 4th Hampton Inn on the trip, we encountered a flock of geese waddling across the road – again - and passed a small grassy knoll with two HUGE rabbits. We settled in for a quick swim and then some time to plan the next day’s drive.
For the record, we drove 550 km today – the longest single day we’ve ever done in the Midget.