Cheese and The Car Show 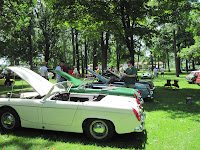 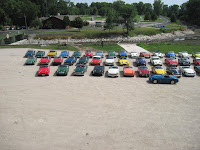 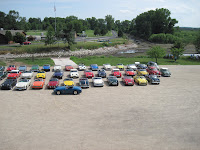 From there we drove to the Marsh where the 50 Years of Midgets show took place and we had lunch. There were 49 cars in the show including Midgets, Bug Eye Sprites and square body Sprites. Ours was the oldest of the Midgets having been built in the first year that they were introduced. A wonderful lunch was provided and at the end when all ballots were submitted, we headed to a field nearby for the photo opp. Our Midget is the fifth from the right on the front row. Jack and Cathy’s is the fourth from the right (Citron) on the back row.

Then we went back to the Victorian Village for a brief swim and a wonderful tech session on Distributors and other aspects of the electrical systems. I learned a lot and need to return one part and purchase a new one from a different source.

BTW – do you remember that my Throttle Cable broke on the way here? Well, one of the participants had several extra cables and gave me one as a spare in case anything happens again. It will be very good to be prepared!

We continue to meet new people from all across the continent. Several came from the Pacific Northwest and others from New Jersey and the east coast. One thing that we did discover is that Barbara and Kathy should win the award for the spouses who traveled in a Midget the greatest distance. Jack and I are not the drivers of a Midget who traveled the greatest distance as that would be the guys from the west and the guy from Florida.

All has been a wonderful time.